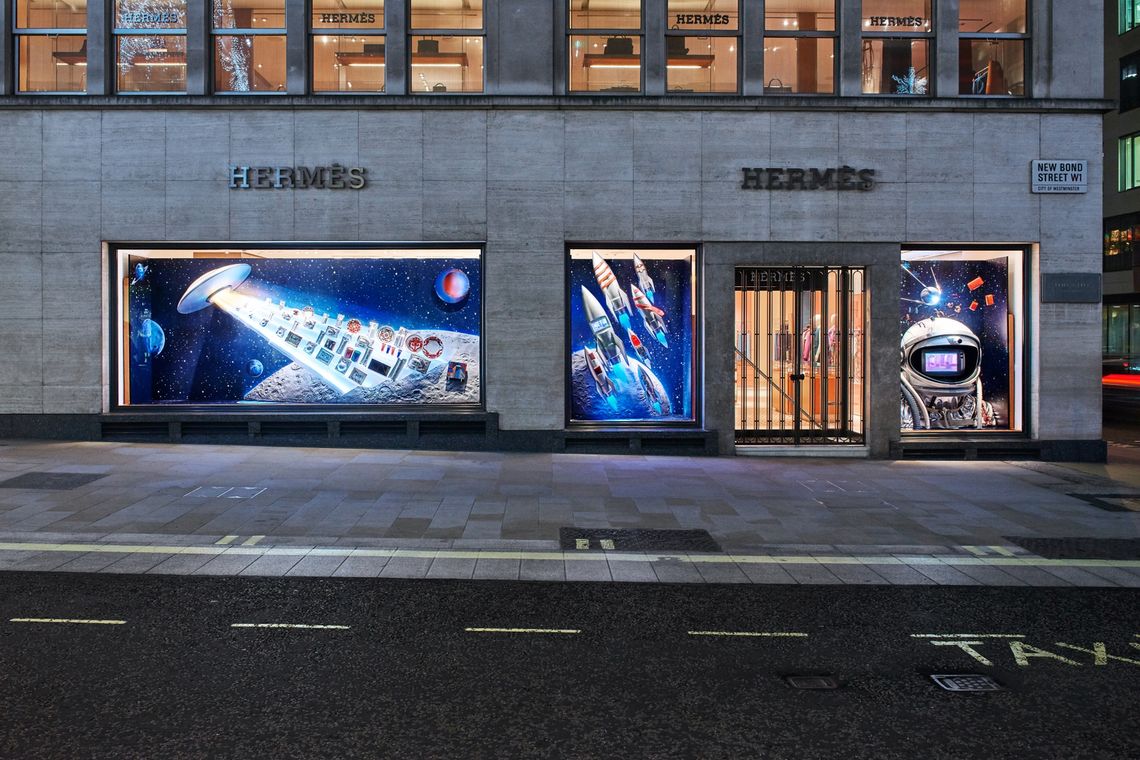 Wednesday 15th November 2017 until January 2018 - Inspired by the beauty of Hermès objects, perfect in both function and form, Anna Burns imagined her desert island essentials list, a perfectly edited selection of festive necessities for the season... but instead of the beach, the Hermès UK windows are taking a trip into outer space. Featuring FACE by Holition and unique to the Hermès store on Bond Street, an interactive, intergalactic animation goes one giant step further...

With a 1960s view of space and the future, the windows have a retro feel. Vacuum packed turkeys and Christmas puddings sit side by side with beautiful Hermès objects, beaming up to the holiday celebration in the sky. Space men and women envisage their most desired Hermès objects floating around their helmets, flying rockets are embedded with treats and a Luna landing sees Hermès scarves set as flags, whilst parachutes drop in delicious gifts.

At Hermès Bond Street, FACE by Holition is awaiting discovery. An old-fashioned TV screen set inside an astronaut’s helmet displays a live feed of Bond Street, almost as if the famous London street has relocated to another planet. As spectators approach, their face is tracked and the animation ignites with a countdown, leaving Earth behind and transcending the viewer, as if through a video game, to the Hermès galaxy.

On the first of two journeys, the viewer’s facial features are augmented onto a 1960s depiction of the moon. A horse, the Hermès muse, rears up atop the anthropomorphised moon as the viewer becomes a magical glittering moon-face. As soon as the first journey concludes, a second journey transports the viewer’s face into a technicolour solar system, within an avatar of rainbow planets and shimmering stars, an asteroid shoots past.

This narrative is split across two windows that frame the entrance to the store, allowing spectators to see from all angles.

Anna’s ideas and research are informed and inspired by her studies in fine art where she became involved in making multimedia installations. She developed a passion for writing in her last year of Art school which led her to pursue an early career in fashion publications. She then discovered an interest in set design within the fashion industry. Since establishing her own studio she has grown from creating still-life sets to producing major creative artworks. This is Anna’s fourth window display for Hermès.

For Hermès, store windows have always been a space for storytelling and fantasy. Windows, such as Anna’s are commissioned with a strong ethos of freedom to the window creator. Every year, Hermès chooses a different annual theme, a creative stimulus to the many local artists and designers with whom they collaborate and a way of viewing the house through a different light. This year Hermès is celebrating the theme of Object Sense.

Notes to Editors:
• Annie Beaumel was the first ever artist to create and animate the windows of the Hermès
store at 24 rue du Faubourg Saint Honoré in Paris from 1927 to 1978
• Leïla Menchari designed and produced the window displays from 1978 to 2013. The launch
of the Christmas windows coincides with the opening of ‘Hermès à tire-d’aile – Les mondes
de Leïla Menchari’ at the Grand Palais from the 8th November to the 3rd December 2017. An
exhibition celebrating the enchanting designs that Leïla created over her many years as
Director of Window Displays for Hermès